Fundraising In Action
Our volunteers donate countless hours in fundraising efforts for Civic Players of Logansport.  We thank them wholeheartedly and applaud their devotion.

We Ate And Ate On The Eighth

On August 8th, 2015, Logan's Landing hosted their 10th annual Taste of Cass County.  Local food vendors and talent of all kinds, got together at Little Turtle Waterway and celebrate the flavors of Cass County.  This year, Civic Players of Logansport was given the opportunity to participate by selling hamburgers and hot dogs.   We thank Marisa Hewitt for donating the hamburgers, Tysons for their donation of the hot dogs, Mr. Happy Burger West, Inc. for the donation of condiments and lemonade.   Crystal Miller, we thank you from the bottom of our buns and Ralph Anderson, thanks for the famous coney sauce!   We appreciate and are very grateful to all those who donated their time and muscle to make this a successful and entertaining event.  The proceeds from this fundraiser went into our General Fund to help pay for the 2015-2016 production season.

Our First Time At The Cass County 4-H Fair

For the first time ever, Civic Players of Logansport was represented at the Cass County 4-H Fair.  The week of July 6-10, we tromped through the mud and had ourselves a hootenanny of a good time.  We had a free raffle including a $100 gift certificate to Arnold's Fine Jewelry and Gifts and the soundtrack to our 2016 musical BIG CITY.  We also had a photo booth where donators could "Take A Pic With A Mustache On A Stick."  Miss Junior Cass County, Syndey Moon, even stopped by to pose!  We handed out over 300 season ticket brochures and signed up several new members.  Thank you to all of our volunteers who watched over the booth.  We had a fantastic time and we hope to see you next year!

Civic Players Of Logansport Take Fundraising To The Streets

On May 8th and 9th, 2015, Civic Players of Logansport held a charitable roadblock in downtown Logansport, IN.  Many volunteers turned out to encourage commuters to help fill the buckets.  The proceeds from this fundraiser go into our General Fund to help pay for a number of expenditures, including our upcoming 2015-2016 production season.

Believe it or not, there are blizzards in Buffalo, NY.  When Lottie and Bernice are involved, you know it will be side-splitting laughter.  Civic Players of Logansport presented "The Lottie and Bernice Show" at the historic State Theatre in downtown Logansport, March 6-8, 2015.  Fundraising Committee members, Becki Harris (Bernice) and Lorien Stair-Spicer (Lottie), pose for a picture with the raffle basket themed for the production.  Some of the items included non-orange chowder, a box of potato flakes, can of spaghetti, ice-scraper, and cleaning wipes (with bleach, of course!).  The Committee also received a generous donation from FRONTIER Communications for the raffle basket.  Congratulations to our raffle winner and wonderful supporter of the arts, Linda Popson!! 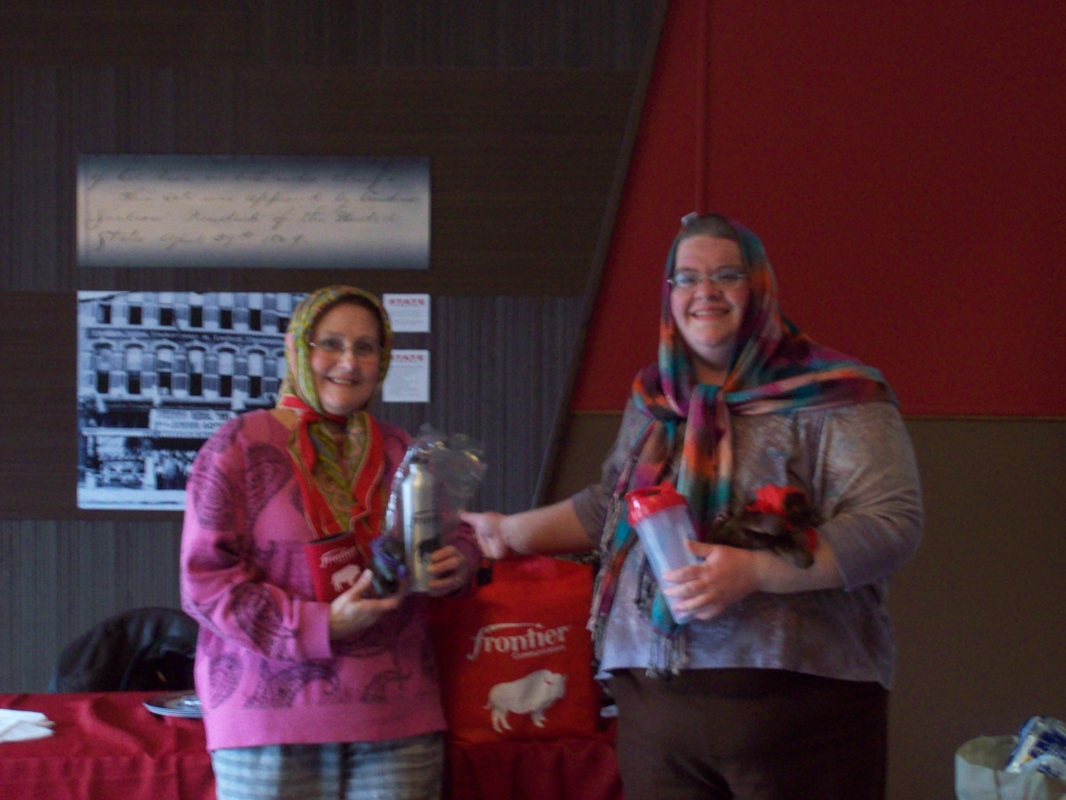